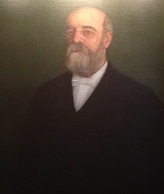 In the most curt and compendious fashion let me try to name a number of the points at which, according to the Christian ethics, the functions of the State may well be extended beyond the limits laid down by the advocates of laissez faire...

1. The sanitary supervision by which pure air and water are secured for all the people is one of the functions of the Christian State. President Walker thinks that this is fairly included within the police functions. Herbert Spencer would hardly agree with him; nevertheless, whether it be old or new theory, it is good sense and good Christian morality.

2. The Christian State can discourage, if it cannot extirpate, the parasites which are fattening upon our industries. Professional thieves, burglars, swindlers, and the like are parasites of industry. All theories of the State agree that they must be suppressed; but there are others toward whom a wholesome severity is required.

The pauper class is growing, and it is fostered by careless administration of public and private charity. The care of the helpless poor is obligatory ; but for all that large class of persons who would rather beg than dig, the State must learn to provide sharp restraint and rigorous discipline. To live without work, at the expense of the community, must be made hazardous and difficult business.

The gamblers, including the crowds of so-called speculators in the cities who get their living by betting on margins, are also parasites. Economically they belong in the same class as the beggars and the thieves; they live without rendering to society any service whatever.

These three classes absorb a large share of the wealth produced without adding anything whatever to the sum of human welfare. Whatever they consume is so much subtracted from the aggregate product of industry, and it leaves just so much less to be distributed among the productive classes. The State must find some way of suppressing this enormous parasitism.

3. The Christian State will find itself enlisted for the extermination of the saloon. Under the theory that government has no power but police power, this might be logically demanded; under the theory which commits the State to the promotion of the general welfare, it is easily justified. Whatever manifestly tends to the detriment of society at large must be suppressed. The liquor interest has become a gigantic, consolidated, unsocial force, directly and malignantly assailing the community, undermining its thrift, corrupting its political life, destroying its peace; and against it, not only the teacher with his science, and the preacher with his Bible, and the philanthropist with his sympathy for the fallen, but "all of us," with all the power we possess, must arise and do battle. Of course it is important that we manage this campaign with that prudence which is always a good part of valor, and that we carefully consider all the conditions in choosing our weapons and our methods of attack; but we need be in no uncertainty as to our ultimate purpose, which is the destruction of the liquor power, the power that everywhere defies the laws and threatens the destruction of the State.

4. A more express interference of the same nature is the prohibition of Sunday labor. In this action the State puts forth its power for the benefit of a particular class, the laboring class. The prohibition of Sunday labor is a plank in the platforms of many socialistic organizations. It is a purely socialistic measure; and I, for one, am Socialist enough to be heartily in favor of it. The one priceless good, of which the workingman ought never to be robbed, is the weekly rest-day. It can never be preserved for him without the interposition of the State. As Dr. Leonard Wolsey Bacon has so clearly shown, the liberty of rest for each requires the law of rest for all. It is probable that some revision of the Sunday laws of most of our States is necessary to adjust them to the new conditions of civilization, but the line should be sharp^" drawn, and every industry that can be interrupted by the Sabbath should be brought to a pause every Saturday night.

5. The Christian State may also find it good still further to limit the hours of daily labor in some callings if not in all. The fact that the machinery now in use in the various manufacturing industries will produce vastly more than the people can possibly purchase, if it is kept in operation through all the hours of the present working day, indicates the wisdom of reducing the number of those hours. This machinery lies idle, on an average, throughout the country, from one to two months in the year. It would be vastly better for the laborers to have it run eight or nine hours a day the year round, than to have it run ten or eleven hours a day for ten months of the year. The simplest way to regulate this may be the direct interference of the State. When all of us are convinced that it is best, all of us can say so, and have it so.

6. The Christian State may also enforce the sanitary inspection of mines, factories, and workshops, to make sure that the health and safety of the working people are secured. This is a service which the intelligence of the nation owes to its toiling classes. Legislation of this kind has been in force for several years in Great Britain and in this country. It is pure Socialism, Christian Socialism, but none the less wise and beneficent.

7. The Christian State will quickly put an end to child labor. Are we aware that in this country, which is growing rich so fast, child labor is increasing fifty per cent faster than the population? That is an evil that the economic forces do not tend to arrest. Nothing but the Christian conscience of the land, expressed in stringent laws, will check its growth. It is quite time that the Christian conscience everywhere should take this form of expression.

8. The Christian State may furnish a certain amount of public instruction and require its citizens to avail themselves of it, or show that they are receiving a full equivalent elsewhere. This is not, of course, an open question in this country, albeit the measure is utterly socialistic. It is true that awkward attempts have been made to justify our public schools on the ground that they prevent crime, but with President Walker, " I do not believe that this was the real consideration and motive which, in any instance, ever actually led to the establishment of the system of instruction under public authority, or which, in any land, supports instruction now. ... In all its stages this movement has been purely socialistic in character, springing out of a conviction that the State would be stronger, and individual members of the State richer and happier and better, if power and discretion were taken away from the family and lodged with the government." And it is greatly to be desired that this work of public instruction should be distinctly and consciously placed upon this higher basis. It is not well done when it is done as a mere extension of the police function of the government. It needs a higher motive.

9. Certain great enterprises for the promotion of the public welfare the Christian State may wisely undertake. Just how much it can do in this direction is not yet clear; the problem calls for conscientious study. It is we, the people, who must solve it, and we need the highest wisdom for its solution. Some things we know that we can do well. Before those who insist that State administration is always clumsy and costly, stands the post-office as a constant confutation. A more efficient or more benign human agency it would be difficult to imagine. It is almost as cheap as light and air and gospel grace. If this business had been left to private enterprise, we should, very likely, be paying to-day five or ten cents instead of two for the conveyance of our letters.